A Reading: The words of women and dreams gone off.

In his marvellous poem, The Tower, Yeats wrote that he had “prepared his peace with the remembered words of woman”.

He placed these words, remembered as they were, alongside learned Italian things, the proud stones of Greece, poet’s imaginings, and memories of love.

Now, I can’t speak to learned Italian things and the proud stones of Greece (we’ll leave aside for now poet’s imaginings and memories of love), but I do know that many of the most important words that have been spoken in my direction have been from the mouths of woman. It’s a fact.

I was reminded recently of woman and the importance of their words when a man came to the cards wanting to know what it is that stops him from achieving his potential. 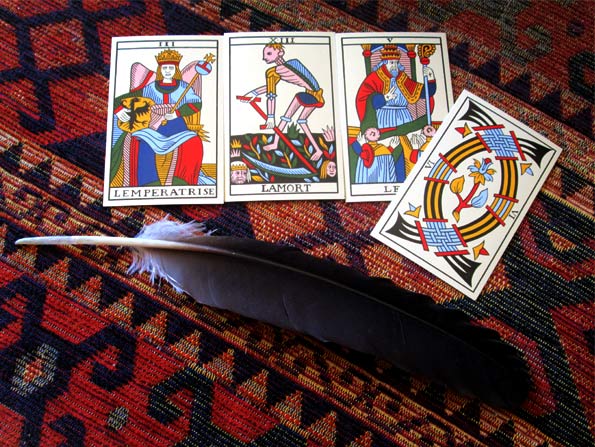 The Empress / Death / The Pope

OK, the first thing to notice here is the Pope's appearance at the end of the line. His presence allows us to infer that the tone of the draw, and the outcome towards which the cards are pulling, is one of teaching and guidance. Notice also how the Pope blesses and points a way forward, gesturing beyond the confines of the cards and into the future.

At the beginning of the draw is the Empress, a lady who knows how to get things done. Her sceptre leans forward, mirroring the Pope's gesture and creating a link or affinity between the two cards.

Then death comes, swiping the woman out of the picture with its blade.

Thus we can say:

The woman in your life have much to tell you, they have knowledge in their gut. But you do not listen. You should. These woman can teach you how to plot a way forward towards this potential you seek to realise. They can point you in the right direction.

But we (the sitter and I) would like to know what, specifically, it is that the woman have to teach in this instance.

For this we turn to the pip cards.

The cards were once again shuffled, and one placed on the Pope: 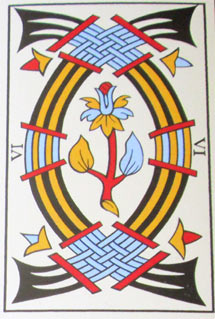 Under this blogger's preferred system of reading, the 6 of Swords indicates a troubled path, a need to change course, or a process of discarding.

So, labouring under the context of what has come before, we can say:

They can teach you where you are heading in the wrong direction.

After all, a woman can be magnifique (I know from much experience) at telling you which aspirations to pursue and which need to be drowned in the pool of dead inspirations.  This is valuable information as nothing can sour a life like the pursuit of a dream long past its sell-by-date.

A note on interpretation: The above cards could conceivably be interpreted as: Stop listening to the Empress in your life (Empress / Death), instead, find a man of wisdom who will teach you what you need to know (Pope). But, remembering the question, any interpretation must deal with what is stopping the sitter from realising their potential, not what the sitter must do in order to realise their potential. This underlines the importance of always anchoring a reading within the limits of a question.

For more on the importance of questions, I would suggest the writings of Camelia Elias. One day, I suspect, she shall be known as the Saint of the question and we shall honour her on a feast day by asking questions that penetrate our assumptions. Hallelujah!

Yours in the drowning of dead inspirations,
Devin.